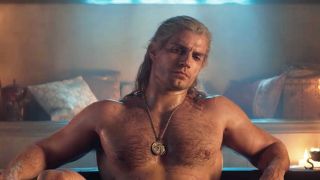 Ah, Bathtub Geralt. The Witcher 3 meme that spawned a thousand uncomfortable conversations – and a NSFW (and not safe for shelves) action figure. It’s even found its way into The Witcher Netflix series – as shown during the second trailer released in October – despite the show leaning predominantly on the books, not the games, for its frame of reference. We recently got the chance to speak to showrunner Lauren S. Hissrich and Geralt himself, Henry Cavill, about why it was included and what the reaction to the moment will be like.

“We consistently go back to the source material for the show,” Hissrich tells GamesRadar+ when asked about why Bathtub Geralt made the cut. “It is fun to visually throw a wink and a nod at video game fans, to say, ‘We see you too. We know you’re here.’ And we want them to be happy with what we’re doing as well.”

For Cavill, it was all about making a “lore-accurate Geralt,” even going as far as to say “I am the meme.” He explains: “Hey, as long as people are happy, that’s all I really care about. Yes, it’d be awesome to see that meme going around. If people are enjoying my Geralt, and if I did my job right and presented a lore-accurate Geralt, then I’m happy. And if that means that stems memes – perfect, yeah, bring them on.”

So, from humble beginnings on sister site PC Gamer to being immortalised on Netflix – soon the whole world will know about Bathtub Geralt. We couldn’t be happier.

All eight episodes of The Witcher arrive on Friday, December 20.

Fancy a Christmas binge? Here are the best shows on Netflix.