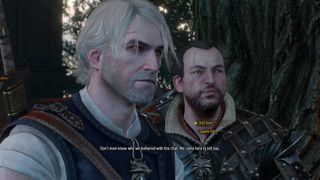 The Witcher 3 Following the Thread quest is a memorable, if lengthy mission, that has it all: old friends, big monsters and tricky decisions to make. You'll have to find and team up with another Witcher, take on an Ekimmara and get out with enough limbs to collect your paycheck.

Because it is one of the lengthier and more involved missions in The Witcher 3 a guide will likely help you out no end. So, if you're about to start The Witcher 3 Following the Thread quest, read on and find out what's afoot.

How to start Following the Thread

After you’ve finished the introductory part of the game, aka meeting up with Yennefer in Nilfgard, you’re asked to look at three different locations where Ciri has been spotted. Emperor Emhyr wants her brought to him, and has asked you and Yennefer to search for her. These three different locations are Velen, Novigrad or Skellige but for the start of this quest, head on over to Novigrad and go to the contract board in Hierarch Square.

Once there, you’ll see a message board called Monster in the Bits. Accept the contract and you’ll be given the location of the supervisor, who’s guard will tell you more about the monster hunting lone victims at night, as well as directing you to the body to investigate the scene.

Before you go, the guard will mention that someone else has taken the contract. So, be quick!

Investigate the Crime and Track the Monster

Head over to where you’ve been pointed to search and you’ll discover a bloody mess of a crime scene. Use your Witcher Senses and interact with everything there, including the tracks of the monster that leads outside of the shed.

Head on up the stairs and you’ll discover your brother-in-arms, Lambert fighting an Ekimmara, a lesser, more animalistic kind of vampire.

Defeat the Ekimmara with Lambert

The Ekimmara can be a slippery foe, especially as it has invisibility, but thankfully Lambert can be a pleasant distraction for the beast. The best advice we can give is to stay on your toes, dodging constantly and weaving your way around the Ekimmara to slash at its back whenever possible. We also suggest using the ‘Igni’ sign, as that can often help finish the Ekimmara off due to fire damage over time.

Once you’ve managed to defeat the Ekimmara, Lambert will agree to split the profits with you and will head back to talk to the supervisor. You can either choose to go with him straight away, or meet up later.

While you may think that the quest is officially done at this point, you’re proven wrong when Lambert starts asking the supervisor where a gentleman called ‘Jad Karadin’ is. This will cause the supervisor to call the guards and run off, with Lambert hot on his heels. Which, of course, leaves with you mopping up the guards.

When that’s done, you’ll discover that the supervisor doesn’t know where Jad Karadin is, but points you towards the Seven Cats Inn in Novigrad where someone called Vienne has more information.

When you meet Lambert there, he’ll explain that his friend was murdered because of a gang of assassins that answered to Jad Karadin. Since then, he’s been after Karadin and his members in order to serve up some payback that they won’t soon forget.

Unfortunately, Vienne doesn’t have much information on Karadin’s whereabouts, but knows where to find Hammond and Selyse, other members of the gang.

Afterwards, Lambert will suggest splitting up, leaving you to head to Skellige to track Hammond down.

Hammond will be based in the village of Trottheim, a small village on the island of Faroe. To get there, we advise fast-travelling to the Harviken checkpoint then grabbing Roach and riding to the village.

Once you arrive, a cutscene will appear and you’ll be asked (in less kinder words) by the villagers there about what you’re doing at the village. After exhausting most of the dialogue in asking about Hammond’s whereabouts, the villagers decide that stabbing you to death seems like a good idea so you’ll have to cut them down. There aren't too many of them, but they can quickly surround you, so be sure to move around.

Once that’s done, head to where Hammond is praying at the shrine. Like the villagers, he won’t be too happy to see you and will attempt to kill you. Return the favour, and you’ll discover evidence on his body that points to Karadin being located in Gildorf in Novigrad.

Meet Lambert at the Nowhere Inn

Head to Novigrad and use the Oxenfurt Gate checkpoint in order to get to the Nowhere Inn faster. Once there, Lambert will give you the run-down of what happened with Selyse, as well as provide more information about Karadin’s shady dealings - particularly when it came to working with slaves.

Once your discussion is over, the two of you can head over to Karadin’s estate.

When you arrive at Karadin’s place, both Lambert and Geralt will be invited inside before they can think of a plan to break into the estate. It seems that Karadin was expecting their visit and, weirdly enough, didn’t think to move his wife and kids somewhere a lot more safe. Regardless, you’ll be doing most of the talking throughout this part of the quest as Lambert isn’t in a very talkative mood.

You’ll discover that Karadin has seemingly changed from who he was before, moving away from the life as a mindless killer to instead settle down with his family as a merchant. Even more conflicting is Karadin’s version of the events leading up to Aiden’s death.