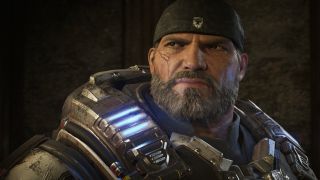 Detective Pikachu and a few others aside, the list of best video game movies reads like a showcase of sub-par efforts and controller-smashing box office bombs. The Gears of War movie is hoping to change that, and it’s planning to do so in a couple of very interesting and potentially divisive ways.

For one thing, the Gears movie isn’t going to simply retrace the steps of the Gears of War games and, for another, it’s going to be set in an alternate reality away from the events of the series. But, don’t worry, it sure sounds like the things that has made Gears so wildly popular will still be present – no word on chainsaws yet, though.

During an interview with IGN, The Coalition’s Rod Fergusson has allowed a first peek behind the curtain at the process behind the Gears of War movie. He reveals that “in order for the movie to be successful, it has to be a great movie first and a Gears movie second. Basically, the way that we sort of reconciled that was, we said, ‘oh the movie should be an alternate reality’.”

So, the Gears movie (probably) won’t be an exercise in fan service and box-ticking to hit all the beats on what a Gears of War film should look like. Fergusson feels that separating the game and movie worlds is crucial, saying: “[The Gears of War movie] should not be dependent on the game story, nor should it influence the game story.”

Of course, if you completely divide things up, you’re going to get a movie about a bunch of burly men with little-to-no necks mowing down Locust left, right, and centre. Entertaining up to a point – but it ain’t Gears. Thankfully, it is implied during the interview that the hallmarks of the series will remain intact. “Certain characters” will still appear, and the movie will still be set on Sera.

The rest, however, isn’t set in stone. That gives the Gears movie some much-needed creative license in the same way that the MCU isn’t beholden to the comic history of its characters. If The Coalition can fire on all cylinders, a certain electric mouse may have some grisly, blood-soaked competition.

The Gears of War movie may be some way off, but the next game entry is fast approaching. Get up to speed: Here's everything we know about Gears of War 5.