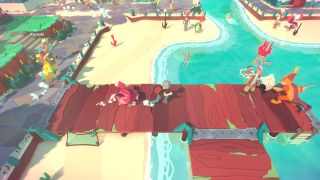 If you prefer to catch 'em all in the presence of other like-minded creature-catchers in an open, shared world, look out for TemTem, a Pokemon-style MMO coming to Steam on January 21.

To be clear, TemTem is not a Pokemon game, nor is it being developed by Game Freak, but it's unabashedly inspired by the franchise. Even the official Steam description labels TemTem a "massively multiplayer creature-collection adventure inspired by Pokemon." Reading the description and watching gameplay footage certainly rings some bells, but it's the MMO aspects that distinguish TemTem as more than a Pokemon clone.

While Pokemon Sword and Shield took one small inspiration from the MMO genre with the open-world Wild Area, that's where the similarities end. TemTem, on the other hand, exists in an online shared-world where you'll team up, chat, and do battle with other trainers, customize your character and home, and of course "catch every TemTem."

TemTem is being developed by Madrid-based studio Crema and published by Humble Bundle. Early Access will be exclusive to PC, but Crema has plans to release TemTem on Nintendo Switch, PS4, and Xbox One at a later date. What you'll get in Early Access includes three islands to explore, 76 TemTems to catch, and a 20-hour campaign. Naturally, Crema plans to build out each of these aspects substantially before the game gets a full release.

If you've caught them all in Sword and Shield and aren't sure what to do with your life, check out these 10 games like Pokemon so the catchin' never stops.