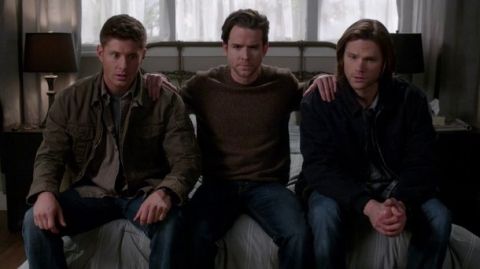 THE ONE WHERE The brothers investigate the case of a witch murdering innocents in his dreams.

VERDICT Another good, if not exactly spectacular slice of Supernatural that impresses with some interesting world-building and lore-expanding, but does so with a script that doesn’t quite zing in the way you would expect Supernatural to, given its recent run of form.

It’s the first time witches have featured in the show since “A Little Slice Of Kevin” earlier in the season, but here they’re much more than an entertaining plot device. Their culture is what makes the whole episode so darn fascinating. So each witch has a familiar, who can transform into an animal, but they’re not supposed to do the dirty (except this pairing do) and there’s this hip bar where they all play telekinetic chess and hold important meetings (you can tell they’re important because no-one smiles). I’m going to guess that witches won’t be a big part of season eight’s remaining episodes, but by treating them like more than creatures-of-the-week it makes the universe feel so much more credible.

The arc plot progresses in a small, albeit hugely meaningful, way with the brothers’ traditional end-of-episode heart-to-heart proving a particular tear-jerker this week (what can I say, I’m a sucker for seeing Dean let his defences down). The main plot, however, is a bit of a mixed bag. The murder-mystery half of the story is little more than cranial popcorn – something to snack on that offers little real substance. It’s the fact that Sam and Dean discover their friend is a witch that really offers something to chew on. It’s been a recurring theme this season – monsters: friend or foe? – and once again we see the brothers walking a fine line between the two here. There’s never really much doubt James is innocent, but seeing the way Dean in particular reacts to each new bit of evidence is what makes the episode work.

Shame then that it’s all so serious. Where are the gags? The quirky asides? The opportunities for physical comedy? There’s a joke about why Dean hasn’t made any jokes about bestiality which is about as funny as a collapsed lung, while the big tough villain’s big tough speech is totally derailed by a bizarre Twilight reference. The content’s mostly good, but the tone’s a little off with this one.

UMM, YOU GUYS… Maybe I missed something, but was anyone else wondering why Portia had to spend the entire episode wearing a dog collar, even in human form? Seemed a little dubious.

FLASHBACK The bad memories Spence forces Sam and Dean to see are from "Pilot", "Unforgiven", "No Rest for the Wicked" and "Swan Song".

BEHIND THE SCENES Thought Sam sounded a little off this week? Jared Padalecki explained why over on Twitter.

No, i havent had a voice change but, yes, I was sick during the filming of tonights episode. It was during the People's Choice Awards. February 21, 2013

WHAT’S IN A NAME Actor Christian Campbell (James Frampton) has guest-starred on Warehouse 13 and Ghost Whisperer. Christian Campbell was also the name of Mary Winchester’s third cousin, a hunter who later became possessed by a demon.

BEST LINE
Dean: “Wow, You know, of all the lame-ass things you've ever said, that has got to be the lame-assiest.”