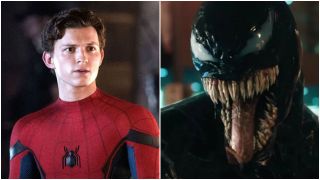 The dispute between Sony and Marvel, which has seen Spider-Man leave the MCU (for now), is still ongoing. According to a recent report, however, Tom Holland was supposed to cross over into the Sony Spider-Man universe much sooner, but an alleged Venom cameo was cut due to Marvel asking for the scene to be removed.

As revealed on the Collider podcast, comedian Jay Washington said, “I’ll tell you the truth: Tom Holland did film a scene for Venom… Marvel saw the movie and was like ‘Take this out. Take this scene out.,’” before detailing, “Peter Parker was in Venom not Spider-Man.”

It’s important to make the distinction that, presumably for rights purposes, the version of Tom Holland’s character in Venom would have been Peter Parker and not Spider-Man. So, the webhead most definitely wouldn’t have suited up to fight against (or alongside) Tom Hardy’s Venom.

Still, if this rings true, it means we missed out on a possible meeting between Hardy and Holland’s characters – but no further reasoning was given for why Marvel wouldn’t want the then-MCU star to appear in the 2018 Sony Pictures movie, nor what the scene would have entailed.

Meanwhile, Andy Serkis has been announced as the Venom 2 director, and his first Instagram post reacting to the news involved the motion-capture legend reading a ‘90s comic book involving, you guessed it, a Venom crossover with Spider-Man. Maybe the Two Tom dream isn’t dead just yet.

Relive the webhead's greatest adventures with our look at the best Spider-Man movies.