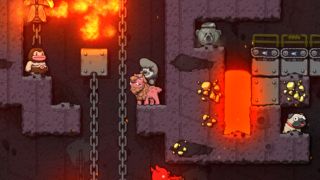 Spelunky 2 probably isn't coming this year, according to a tweet sent out by creator and developer Derek Yu, explaining that the "density and detail of the game is demanding more time." Yu also assured fans that development is still going smoothly and that while the game likely will miss its previously scheduled 2019 time frame, Spelunky 2 isn't "far off target."

Yu also took the time to address a few other concerns from fans. In response to complaints about a lack of developer updates, Yu apologized and expressed the challenge of providing consistent updates without spoiling the content, and assured his followers that his team at Mossmouth is working hard to wrap up development on Spelunky 2.

The developer went on to acknowledge comments his team had seen regarding the environments shown in the trailer, adding that they'd since added detail and increased contrast to make things a little more vibrant. Finally, Yu shot off a closing tweet committing to sharing Spelunky 2's release date as soon as it's concrete.

Spelunky is an inventive 2008 indie platformer featuring procedurally-generated level design, dangerously addicting gameplay, and an all-too-rare local multiplayer mode. The developers seem to be wisely sticking to the same great formula that made Spelunky a modern roguelike classic with Spelunky 2. We even ranked the long-anticipated sequel among the top upcoming games to look out for in 2019, and we won't let this minor setback stifle our enthusiasm.

Itching for indie? Check out our top picks for 2019.