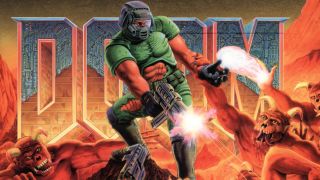 Speaking to Metro, Stratton was asked to comment on the rumors about Doom Slayer coming to Smash Bros. Ultimate, to which he replied, "I don't know. We've asked them." Stratton continued:

"We’ve had… I don’t even know who talked to who, but we’ve bantered with them. We have a great relationship with them through bringing Doom 2016 to Switch and that kind of stuff. So we have great people over there but it’s one of those things where it’s like, ‘Wouldn’t it be cool?’ But it’s never gone anywhere serious, so we’ll see."

Stratton clarifies that id Software haven't been asked for the rights to bring Doomguy to Smash Bros., but says they're open to the idea.

It's hard to imagine a character we're so used to seeing covered and surrounded in blood come to Smash Bros., and quite frankly I'm worried about the innocence of fighters like Pikachu, Villager, and Bowser Jr.

Just a couple of days after Stratton made the comments on Doomguy and Smash Bros., Nintendo revealed that Fire Emblem's Byleth would be the next Smash Bros. Ultimate roster addition. A recent leak says the next fighter coming to Smash Bros. could be none other than Crash Bandicoot.

Still looking for your main? Here's how to unlock every Smash Bros. Ultimate character and how to win with every character.