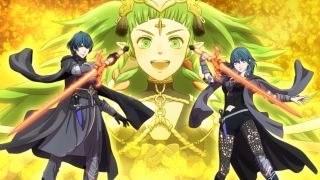 The next Super Smash Bros. Ultimate DLC fighter is Byleth from Fire Emblem: Three Houses, Nintendo announced during a livestream today. Well, I say fighter, but we're technically getting two fighters: both male and female Byleth. The difference is just cosmetic, though. Byleth will be released on January 28 as part of the game's Fighter Pass, or individually in a $5.99 Challenger Pack.

Byleth is Ultimate's sixth DLC fighter and its eighth Fire Emblem character. Given Fire Emblem's existing roster presence, many players were both surprised and disappointed by Byleth's reveal. That said, Byleth does track with some other DLC characters, especially the Hero from Dragon Quest 11. Fire Emblem: Three Houses is another recent, successful Switch game, so in a way, it's no surprise to see Smash borrow one of its leads.

Nevertheless, the Smash community is ablaze with criticism, with many fans questioning the decision to add yet another Fire Emblem swordsman when [insert favorite character here] is still crying on the sidelines. Suffice it to say, the reaction has been mixed.

I'm glad Sakurai is explaining the Fire Emblem series to Smash players, a franchise they are not familiar with #SmashDirect pic.twitter.com/JC6vpF8ia3January 16, 2020

To Nintendo's credit, Byleth does seem to play at least slightly differently from the other seven Fire Emblem fighters. Byleth has low mobility and short grab reach, but Sakurai described them as a "distance demon" which excels at mid-range encounters. They wield four different weapons - the sword, bow, halberd, and axe seen in Three Houses - which are assigned to different directional inputs. The sword is used for fast upward, dash, and flurry attacks; the halberd makes for far-reaching forward and back attacks; the axe is used for powerful down attacks; and the bow allows for some spicy ranged attacks. If nothing else, Byleth isn't a straight-up Marth or Ike clone.

Byleth's a pretty flavorful character, too. Their alternate skins channel the house leaders from Three Houses as well as Sothis, and their matching stage - the Garreg Mach Monastery - is an iconic area. Will that help numb the pain of [your favorite character] getting ignored in favor of another anime swordsman? Probably not.

Here are all the Super Smash Bros. Ultimate character unlocks you need to fill out your roster.