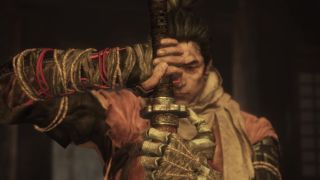 The next Sekiro update goes live today with balance tweaks to prosthetic tools and combat arts, as well as a nerf to one especially troublesome miniboss. Minor spoiler warning if you're trying to play through Sekiro with no idea of what's coming up next, but everybody else may be happy to learn that Blazing Bull will burn a little less brightly in Sekiro version 1.03. The new update will arrive on Tuesday, April 22nd, at 6 pm PDT / 9 pm EDT or Wednesday, April 23 at 2 am BST - here are some of the highlights while you're waiting for your download.

A giant bull with flaming straw strapped to its head, Blazing Bull is a tough boss in the early game. Most of that difficulty comes from just how fast and unpredictable he is as he charges and sweeps across the arena, and this update makes no changes to that battle style. What it does do is "slightly" reduce both Blazing Bull's Posture and Vitality in an attempt to improve the game's pacing - in other words, he'll die faster now even though he still hits just as hard. You know it's bad when even From Software goes, "Hey, this fight is a bit too tough."

Even if you're way past the bull, it probably won't take you long to notice the way Sekiro version 1.03 tweaks Prosthetic Tools and Combat Arts. Four tools and more than a half dozen arts have been altered, though From Software isn't saying how for most. It did specify that the first hits for both the "Senpou Leaping Kicks" and "High Monk" arts have had their Posture damage reduced with the rest of the combo damage increased to make up the difference. On the tool side, Sabimaru will now build up more damage in enemies that are weak to poison.

Divine Confetti is a useful item, as it allows you to do normal damage against apparition-type enemies (who are ordinarily quite hard to fight). Though you can find it as loot in a few places out in the world, there is only one place where you can reliably farm it from enemies: killing Fencers (AKA blue-robed samurai) in Ashina Castle. You won't have to slaughter quite so many of them to build up your confetti reserves now, as From Software has increased how often they drop the prized paper.

Here are the full update notes from the official site.

Adjusted the efficiency and Spirit Emblem cost of the following to encourage usage and diversity of approach:

Reduced the Posture damage dealt by the first hit of the Combat Arts "Senpou Leaping Kicks" and "High Monk" as it was causing more damage than intended in certain cases. Posture damage dealt in the latter-half of the combo has been increased.
Increased the Poison build-up dealt by the Prosthetic Tool "Sabimaru" against enemies that were intended to be weak against it.
Increased the drop rate of "Divine Confetti" for Fencers in Ashina Castle.
Adjusted loading screen tips and tutorial text, as well as adding new text.

Slightly reduced Posture and Vitality of Blazing Bull in order to improve game pacing and balance time in combat.
Lowered the price of information sold by Anayama the Peddler.
The Chained Ogre inside Ashina Castle is now Red Eyed.
Fixed a bug where "Gokan's Sugar" and "Gokan's Spiritfall" were not mitigating player Posture damage taken while guarding or deflecting enemy attacks.
Fixed a bug where system crashes could cause save data to become corrupted on PC.
Fixed a bug where certain enemies would sometimes stop attacking the player.
Fixed a bug where certain actions could not be performed after reconfiguring the controls.
Fixed certain bugs that were allowing the player to access unexpected areas, which could result in becoming unable to obtain items or make further progress.
Fixed cases of certain text being displayed incorrectly.
Improved stability.
Improved performance.
Other various bug fixes.

If you ever lose your way, just check our Sekiro walkthrough to get back on track. Or see what's next for games and entertainment this week with our latest Release Radar video.