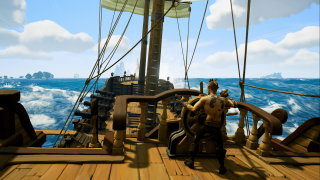 Sea of Thieves is experiencing a renaissance with the launch of the Anniversary Update, but also a return for the Sea of Thieves Bronzebeard error (yes, Sea of Thieves' error messages are denoted by beard styles.) Unfortunately, it seems the new stuff and a surge of returning players are causing errors as the servers deal with heavy load. In this short article we're going to show you the steps necessary to fix the Sea of Thieves Bronzebeard error if you're struggling to log in, and let you get to a suite of fresh content including story-focused Tall Tales and fishing.

How to fix the Sea of Thieves Bronzebeard error message

It's a nightmare situation. You're logging into your favourite pirate simulator but just before you can set sail, you're stopped in your tracks. The scurvy dog Captain Bronzebeard has appeared, ready to sink your proverbial ship. Never fear, brave adventurer, as Rare themselves have a surefire process to fix this issue: quit the game.

There's no shame in it. You'll get him next time. Specifically, you want to quit the game in a particular way to make sure the error doesn't come back.

Rare states that you must follow this procedure to get rid of Bronzebeard.

There we have it. That should sort out your Bronzebeard issues. If this doesn't work, there may be a deeper server-bound problem at play.

Hopefully this lets you get out on the open water without too much trouble so you can live the life of a mighty pirate once more. Safe travels!