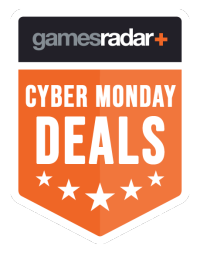 Everyone's talking about Solid State Drives at the moment, and with good reason – it's long been know that they're much faster than standard drives, as well as being more reliable thanks to their lack of moving parts. However, they've also traditionally been considerably more expensive than their regular counterparts. Recent trends have seen that price gap decreasing, and thanks to Cyber Monday SSD deals such as the ones we're going to look at here, there's never been a better time to take your storage to the next level.

There's a number of reasons why the Samsung T7 Touch stood out for us within the myriad Cyber Monday deals available. Firstly, you're getting 1TB of fast storage for a very reasonable price, with promised read speeds of up to 1,050MB/s and write speeds of up to 1,000MB/s, which is over nine times faster than your standard hard drives. Secondly, see that fancy LED square on the top of the SSD? Not only is it a status indicator to show you what the drive is doing, but it also acts as a fingerprint reader you can use to unlock your files. With data security under increased scrutiny these days, you can protect your sensitive information with the touch of a finger.

Samsung T7 Touch 1TB SSD (Silver) | $159.99 at Amazon
Samsung is a trusted name when it comes to storage quality and reliability, so you know you're making a wise investment with this SSD. Optional fingerprint security provides additional peace of mind, if you're transporting sensitive documents.

Samsung T7 Touch 1TB SSD (Black) | $169.99 at Amazon
The Black version of the T7 Touch is, other than a different finish, the same great Samsung SSD technology. With read and write speeds around 1,000MB/s, you should notice a big difference if upgrading from a standard drive.

Samsung T7 1TB SSD (Blue) | $149.99 at Amazon
If you don't need the extra layer of protection provided by fingerprint security, but still want seriously fast read and write speeds, then you can save even more with the original T7 drive. Also available in Red or Gray finish for the same price.

Just in case you were considering picking up the Samsung T7 Touch SSD to add 1TB of fast storage to your PS5 or Xbox Series X, we should clarify that you can only store your PS4 or Xbox One backwards-compatible games on it for the time being, as with any other external drive. Even though this is an SSD, you won't be able to play your next-gen games from it, as they can only be saved and run from the internal console storage. However, the quicker access means it's still very worthwhile adding an external SSD to your setup.

If you've not made the step up to a new console yet, or you're looking for accessories to pair with your recent upgrade, then make sure you see what Cyber Monday PS5 deals and Cyber Monday Xbox Series X deals are available. And if you need a new screen to truly appreciate those next-gen visuals, then the Cyber Monday TV deals have got you covered.

Iain originally joined Future in 2012 to write guides for CVG, PSM3, and Xbox World, before moving on to join GamesRadar in 2013 as Guides Editor. His words have also appeared in OPM, OXM, PC Gamer, GamesMaster, and SFX. He is better known to many as ‘Mr Trophy’, due to his slightly unhealthy obsession with amassing intangible PlayStation silverware, and he now has over 300 Platinum pots weighing down the shelves of his virtual award cabinet. He does not care for Xbox Achievements.

The best Xbox One external hard drives for 2021