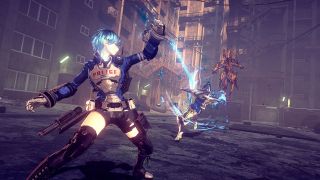 Bayonetta and Astral Chain studio Platinum Games has accepted an investment from Chinese tech and gaming giant Tencent. In a statement from Platinum Games president Kenichi Sato, the investment is described as a "capital alliance" that won't affect Platinum Games' independence or management structure.

Tencent is the largest gaming company in the world, with sole ownership of Riot Games and investment stakes in Ubisoft, Epic Games, Blizzard. Platinum Games says they plan to use the funding to "strengthen our foundation as a business and expand from game development into exploring self-publishing." Sato also says he hopes the partnership will help give Platinum a  "wider global perspective, while still creating high quality games that stay true to our name."

The developer's aspiration to transition into self-publishing their games is nothing new. In an interview with VGC from May, Platinum Games head Atsushi Inaba expressed his frustration with publishing IPs through an external company, saying, "For us as creators, we want to get to the point where self-publishing allows us to own our IP and do what we want with it, including making sequels. So the faster we can have that freedom, the better if will be for all the creators here."

Tencent's hands-off investment should help Platinum pursue their self-publishing initiative and push out more sequels to original IPs. Inaba also said the studio is working on a brand new IP he describes as "something that has never been done before." Hopefully the influx of capital means we'll hear more on that front in 2020.