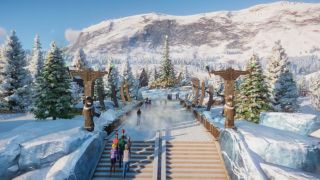 Planet Zoo's first paid DLC pack will bring an Arctic chill to your zoo on December 17. The Arctic Pack costs £7.99 / $9.99 / €9.99 and introduces four new animals, two themed story scenarios, and new arctic foliage and scenery content. The paid update is accompanied by a free patch including a few smaller goodies and fixes.

The new animals are the Arctic wolf, polar bear, reindeer, and Dall sheep (Dall sheep are those sheep with goat horns). In addition, the DLC gets you two new story scenarios that will involve "expanding and maintaining existing zoos while ensuring animal welfare and educating guests." The new stories will take you to the white mountains of Norway and the not-as-snowy "arid desert biome" in Mexico.

The free update doesn't include any of the new animals or paid content, but all Planet Zoo players will enjoy a new option to slow down animal aging, updated animal info panels that include immediate family members, new heat maps, nature assets, and a bunch of bug fixes and adjustments. You can check out the complete list of updates coming to patch 1.1.0 over on Steam.

Developer Frontier also shared some stats from player data proving lots of people like running zoos, as Planet Zoo's player base has bred 62 million animals and hired 23 million staff members in the first month since launch.

We're but a few short weeks away from 2020, so let's look ahead to the most exciting upcoming games of 2019 and beyond.