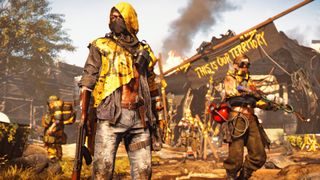 The Division 2's first raid was released last week, and while many PC players managed to clear it within five to ten hours, nobody beat the raid on console until roughly 36 hours had passed. Many players argued that the raid is inordinately difficult on console compared to PC due to technical limitations, and some players asked developer Massive Entertainment to tweak it to make it more approachable (putting together a team of eight is already a tall task without in-game matchmaking). However, in its latest State of the Game stream, Massive said it isn't planning to rebalance the raid.

"We've heard rumors about us changing the raid difficulty," said community developer Chris Gansler. "There's currently no plans to change that. We know the raid is harder on console but we are happy with where we're at. We've seen multiple people clear it, and I've seen people take a message that 'oh, the door is open for changes.' And we're always open to changes. If the community is giving us the feedback that something is not how they like it, we're not afraid to do changes. At the moment though, for the raid specifically, we aren't planning any balance changes right now."

So if you were hoping to see the raid dumbed down a bit, don't hold your breath. That said, you should find the raid - and other endgame activities - less brutal in the coming weeks once Massive fixes a bug causing The Division 2's AI to act too aggressively. The same problem was highlighted roughly six weeks ago, and at the time Gansler said that enemies were mistakenly behaving as though players were constantly low on health. However, Gansler says the latest wave of kamikaze enemies was caused by a new, different bug.

"One thing we've seen come up again - and some people were thinking we forgot something - is NPCs being more aggressive, being very quick, rushing to people," Gansler said on the recent stream. "Unfortunately that's not an old bug. It's a new bug. It didn't get caught on PTS, and we didn't catch it internally either. That's not something old, it's actually a new behavior. So for this we need to fix a couple things specifically. It's one of our highest priorities. We know it's very annoying - we play as well and we have been there.

"I just talked to the dev team that's leading that effort and they're focused on a couple things. They found a couple of other bugs that make this look worse than it is. There's an animation situation that's not perfect, sometimes NPCs look like they're super-speeding after you. They've identified those issues and are working on fixes. Just to be clear, some of these fixes will be happening with update 3.1, some will happen a little later. The most important one, with NPCs rushing you or rushing by you, that's something we want to fix with 3.1 for sure."

Massive hasn't committed to a release date for The Division 2 update 3.1 just yet, but it shouldn't be too far off. So if you're fed up with the raid for now, maybe give it another go once the AI has its leash tightened, hopefully within the next couple of weeks.

While we wait for update 3.1, brush up on the latest Division 2 Patch notes here.