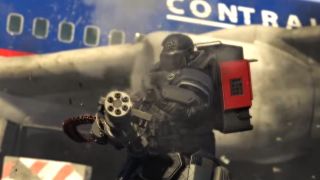 After a slight delay, the first Division 2 raid, Operation Dark Hours, was released yesterday. It's a top-level activity filled with immensely tanky Black Tusk fighters and vehicles, and even for the best players in the game, it's proved to be an enormous challenge. Nevertheless, a band of eight - one of whom was missing during the final boss - managed to clear Dark Hours roughly five hours after it went live. The Division 2 Twitter confirmed the world's first completion in a tweet:

For comparison, the first raid in Destiny 2 took players roughly six hours to clear. YouTuber and Twitch streamer MarcoStyle led the successful Dark Hours squad and archived their world-first victory on Twitch. Skip to 1:49:10 in this archive video if you want to watch it from the beginning. Their run against the final boss - which took them nearly three hours - starts around 3:20:30. As the first players to clear Dark Hours, Marco and his pals will have their names and pictures added to the game's White House headquarters.

Notably, Marco and the gang were all playing on PC. Several other PC teams have since cleared the raid, but at the time of this writing, nobody has cleared the raid on PS4 or Xbox One. Many players have argued that this is due to the technical differences between console and PC. Controllers make for slower and less precise aiming, and the console version of the game runs at a lower standard frame rate. These performance differences can certainly make shooters more difficult, but it's unclear whether they're the only culprit. If nothing else, I suspect they're a big factor, as console and PC players are equally powerful based on their builds alone.

Division 2 players on PC have one definite advantage over console players: they're already on their computer, which is where players will need to look for teammates as Dark Hours doesn't have matchmaking. Unlike other Division 2 endgame activities such as strongholds and Heroic missions, you'll need to manually group up with players via forums and LFG (Looking For Group) apps and sites if you want to try the raid. The lack of matchmaking was only announced last week, and was immediately unpopular with Division 2 players - so much so that Ubisoft community developer Chris Gansler penned a response to address the outrage.

"The raid will require very good communication between agents, adjusting to situations on the fly, and firepower alone will not be the decisive factor to get through the National Airport," he wrote. "Therefore, our decision was to not include matchmaking, as the difficulty level is designed for coordinated groups and clans, that will prepare, plan, and execute their strategies.

"While all activities at launch had matchmaking as stated previously, technical constraints or gameplay purposes can bring us to not implement matchmaking on some post-launch activities. We hear your feedback, we read all your comments, and we'll keep discussing it internally and with you. To be clear: We don't have a simple switch to turn on matchmaking for 8 random players. We still think that might not be the best solution in the end."

More recently, Massive Entertainment confirmed that it's working on a way for players to link up in-game without the use of third-party forums and apps. It's unclear when this feature will arrive, and it doesn't sound like a full-blown matchmaking system, but Massive said it'll have "some solution" for players looking to build raid groups.