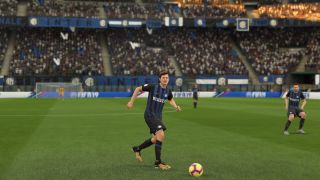 The opening step in Inter Milan’s plan to secure a first Serie A title since 2010 is the addition of Cagliari’s star player on loan, but what do the Nicolò Barella FIFA 19 stats tell us about his chances of succeeding at Italian football’s third-most successful club?

The fact that there are three separate cards bearing Nicolò Barella FIFA 19 stats is a promising start. His FIFA 19 journey began with a 76-rated standard gold item, but he then appeared in two different TOTW line-ups for weeks 28 and 39. Those appearances granted him in-forms cards rated 81 and 84.

As with our in-depth look at Bruno Fernandes’ FIFA 19 stats, it’s the standard card we’ll use as the basis for this detailed profile.

That 76 OVR isn’t the best of starts: it ranks Barella well below other midfielders already contracted to Inter, such as Ivan Perisic (86), Radja Nainggolan (85), Joao Mario (81) and Borja Valero (81). To offset that, it should be noted that Barella’s career mode potential is 89, so Inter clearly know what they’re buying into.

The most noteable Nicolò Barella FIFA 19 stats are a trio of numbers in the eighties: the Italian earns 82 for stamina, 80 for dribbling, and 80 for balance. His sprint speed (77) and acceleration (79) are also tidy for a CM, with other pleasing attributes comprising ball control (77), long passing (79), short passing (79) and agility (76).

However, there’s some tough work to come on the training pitch from an attacking standpoint. Barella’s penalty box instincts are alarmingly poor, with him rated 65 for positioning, 57 for shooting, 58 for long shots, and 53 for volleys. Ouch.

Nicolò Barella Football Manager 2019 stats tell a kinder story in front of goal. SI Games’ dugout sim rates out of 20 rather than 100, and in attacking sense he actually does okay: 11 for finishing, 12 for long shots, and 13 for composure.

Indeed, FM 2019 sees Barella as a true engine-room all-rounder. He only earns one rating of 16, for determination, but a host of 15 ratings cover attributes needed to cover all areas of the pitch: work rate, teamwork, natural fitness, and stamina. First touch (14), passing (14), tackling (14) and vision (13) also come in very handy.

It’ll be a month or two before we see how the Nicolò Barella FIFA 20 stats shape up, but I’d expect an overall of at least 80 for a player said to be worth 35million Euros. More on that once the 2019-20 season gets underway.