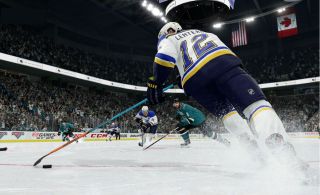 It’s not only FIFA 17 and Madden 17 making a big deal of Ultimate Team this year – NHL 17 sees the hockey equivalent upgraded with a concept called ‘synergy’.

Previously, your dream roster was built around the concept of player chemistry; synergy expands upon that idea, by delivering stats bonuses when you pair two identically synergised team-mates together. In case that sounds ridiculously technical, here’s an example of Player Synergy provided by EA:

Sound complex? It is, but should make total sense once you jump into the game. Hopefully that’s also the case for Team Synergy, which again is best explained via EA’s specific example:

Other additions to NHL 17 Ultimate Team are the ability to earn unlockables by collecting ‘Dynamic Sets’ of player cards, a biography screen for every player in your squad, the ability to own duplicate versions of the same item (for trade purposes, say), and the ability to purchase NHL Points with real currency.

For a full rundown of new features, hit the official NHL 17 website.

NHL 17 is released for PS4 and Xbox One on September 13 in North America, and September 15 in Europe.