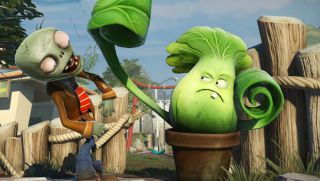 Electronic Arts has filed a new trademark for the term "Plants vs. Zombies: Battle for Neighborville".

Spotted on the European Union's Intellectual Property Office records (thanks Gematsu and @the_marmolade), the full filing doesn't offer much else other than the date the trademark was filed – August 9, 2019 – and confirmation the trademark has been registered against the NICE classifications 9 and 41, both of which simply confirm the trademark pertains to a downloadable computer game that's categorised as an "entertainment service".

If you know a little Plants vs. Zombies lore, you might know that "Neighborville" is the name of the suburb in the Plants vs. Zombies comics, and given EA representatives told investors that a new PvZ game was slated to release before the end of the financial period – March 2020 – it's probably safe to assume we'll find out more soon rather than later.

Of course, like patents, trademarks only exist in theory, and just because the name's been trademarked doesn't mean we'll definitely get a game of that name. It is interesting, however, that the trademark is filed just a few weeks after EA sent out alpha playtest invites for a new Plants vs. Zombies shooter codenamed "Picnic" at the end of last month. Described in the beta information as a new game "made by the Garden Warfare team", could Plants vs. Zombies: Battle for Neighborville be the next Garden Warfare instalment?

As for Plants vs Zombies 3? It looks like that will be coming to mobile devices soon. A limited pre-alpha build of the game popped up on Android devices last month.

Looking for something else to play on your Android phone while we wait for Plants vs. Zombies 3? Then check out the 50 best Android games, from epic RPGs to tiny puzzlers.