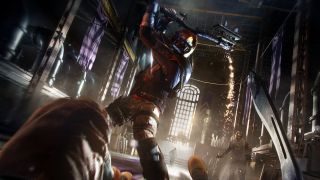 Dying Light 2, Techland's upcoming open world action game, is about to make a big splash at this year's Gamescom expo in Cologne, Germany, with a fresh, extended look at its unique blend of first-person parkour/zombie-bashing gameplay.

Previously shown behind closed doors at E3 2019, the roughly 30 minute demo will be streamed online at 11AM PT/2PM ET/7PM BST on Monday, August 26, and promises to be "the largest piece of Dying Light 2 gameplay released to date."

On The Radar: Dying Light 2 – An exclusive look at one of the most anticipated action games of the generation

Our Dying Light 2 E3 2019 preview gives you a good idea of what you can expect from the upcoming gameplay reveal, which focuses on the narrative sandbox of Techland's new open world, which reacts organically to the choices you make as Aiden, the sequel's new protagonist.

There'll also be a better look at Dying Light 2's enhanced parkour system, combat mechanics, and story, all of which are set to mark a major improvement over everything seen in 2015's Dying Light, which thousands of people are still playing to this day.

In other news, Techland has already confirmed that Dying Light 2 will be a cross-gen title for PS5 and Xbox Project Scarlett in addition to current consoles, and that a small team within the studio are still working on new DLC for the original game. We'll be sure to keep you informed once the new gameplay drops, too, and stay tuned to GamesRadar+ for more Dying Light 2 coverage in the lead up to its early 2020 release.

For more, check out the biggest new games of 2019 and beyond on the way, or watch the Release Radar video below for a guide to everything else out this week.