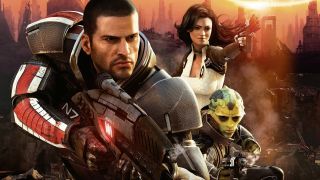 The lead writer of the first two Mass Effect games is now the lead writer at Archetype Entertainment, and he's shared some telling insight into how he got there.

Drew Karpyshyn has writing and design credits on many beloved BioWare games on top of Mass Effect and Mass Effect 2, including Star Wars: Knights of the Old Republic, Neverwinter Nights, Jade Empire, and Anthem. OK, Anthem may not be beloved, but that's not all the writing's fault.

In a blog post that updated Karpyshyn's fans on his creative pursuits over the last few years, he was frank about his experiences with BioWare - a company that he actually left twice, once in 2012 and once in 2018 after rejoining the studio to work on Anthem.

"I’ve been in the video game industry for twenty years now. When I started at BioWare, everything was fresh and exciting," Karpyshyn wrote. "It was a dream job - talented people working together to create epic games like Baldur’s Gate, KOTOR, Mass Effect and Dragon Age.

"But as we grew and became more successful, things changed. We became more corporate. We were less able to make what we loved, and the teams were pushed to create games based on market research rather than our creative instincts and passions. My dream job became just a job, and I lost the enthusiasm and excitement I once had."

BioWare has endured an exodus of senior leadership in recent years: the co-founders of Archetype, James Ohlen and Chad Robertson, are also recent BioWare alums.

Not to end on a downer, Karpyshyn added that his passion for making games has been rekindled at his new place of work: "With BioWare, I was part of a legacy that will endure forever. We created some of the most beloved CRPGs of the past two decades. But I truly believe at Archetype we have the talent and the opportunity to do something just as amazing!"

Now if only Archetype would give us more specifics than 'sci-fi RPG'.

Seriously, we can't add Archetype's new project to our list of the best upcoming games until we know what it actually is.