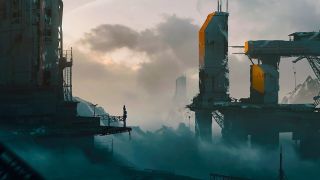 Two former BioWare bosses have reunited to form a new studio, and they're already teasing its first project: "a multi-platform roleplaying game set in a new science fiction universe". The team at Archetype Entertainment is still coming together, but it already has solid backing. The studio is an "autonomous division" of Wizards of the Coast, the same company behind both Magic: The Gathering and Dungeons & Dragons.

The two co-founders of Archetype Entertainment are James Ohlen and Chad Robertson. Ohlen, head of studio at Archetype, has BioWare credits stretching back to Baldur's Gate. He was also lead designer of Dragon Age: Origins and game director of Star Wars: The Old Republic (he took a brief break from video games to co-create a Greek mythos-inspired setting and adventure for Dungeons & Dragons). Chad Robertson was most recently the head of technology for Mass Effect: Andromeda and live services director for Anthem, and now he's the general manager at Archetype.

"At Archetype, we believe there will always be a place for story-driven roleplaying games that put the player at the center of an epic personal narrative with impactful choices," the studio's official site says. "We are building games that represent the diversity of our audience. We also believe that game studios should empower top developers and challenge them with ambitious projects that are shaped by a strong, clearly communicated creative vision."

The site also has a few pieces of art that may tease the visual direction for Archetype's first project: the big image at the top shows a worn-down facility criss-crossed by support structures and antennae; and the smaller image just below shows a figure in the foreground looking out at an industrial complex dominated by a huge, smoking building (or maybe vehicle). Also, there are two moons, because sci-fi. The third image is of Austin, Texas, where the studio is located. Don't try to find any teasers for the game in that. Unless it's… Space Austin.

Hopefully we won't have to wait long to add Archetype's first project to our big list of upcoming games.