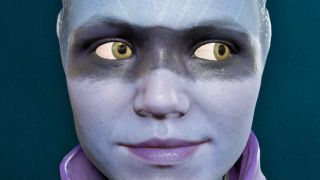 There's nothing "partial" about the nudity in Mass Effect: Andromeda. Cue up the funky soundtrack, because according to BioWare Edmonton general manager Aaryn Flynn, Andromeda is going to be a very sexual kind of science fiction adventure. Talk about action RPGs, right? Right?

Remember. We lost the "partial nudity" rating and got full "nudity". https://t.co/yauGf9CnolFebruary 26, 2017

Mass Effect and Mass Effect 3 both had "partial nudity" content descriptors from the ESRB. I remember it turned into a Whole Thing on the mainstream news networks way back when. Well, talking heads, get a load-a this!

Sorry, I gave the wrong impression. We have strong characters, great gameplay, romances, and more, all dealing with mature themes. https://t.co/GAy6ZIzIPCFebruary 27, 2017

@of_somebody Yes definitely. Our developers worked extremely hard to bring these characters to life in a responsible way. My bad word choiceFebruary 27, 2017