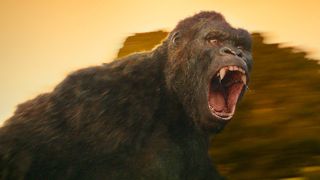 The last time we saw King Kong roaring across the big screen was more than a decade ago in Peter Jackson’s 2005 take on the classic cinematic beast, and Kong: Skull Island director Jordan Vogt-Roberts isn’t about to simply repeat what’s been done before in his upcoming blockbuster. The director recently spoke with SFX Magazine and revealed some cool news: there won’t be any dinosaurs in his film, and instead we’ll see entirely new creatures that were inspired by some unlikely sources.

“The first mandate for me was ‘No dinosaurs.’” Vogt-Roberts said. “Jurassic World owns that as far as I’m concerned, and Peter Jackson’s version did such a great job with that V-Rex fight.” In avoiding tropes of past Kong movies, the filmmaker is clearly looking to chart his own path. That’s probably a wise move, since the dino vs. Kong fights were the most thrilling and memorable parts of Jackson’s film, and the Jurassic franchise definitely has the market on epic dino action cornered at the moment.

So if dinosaurs are off the table, what’s a filmmaker to do? According to Vogt-Roberts, the aim was to invent a set of original creatures that seemed not quite as big and bad as Kong himself, but still powerful and epic enough that they’d be lords of their own individual lands. It almost sounds like the feudal system writ large on a mysterious, ancient island. That’s a cool approach.

But the strangest part is the inspiration points for these new creatures. “Miyazaki and Princess Mononoke and in a weird way Pokemon were odd reference points. Because I wanted these things to have a spirituality to them and an essence to them, and I wanted all of them to simultaneously be gorgeous and terrifying.” Pokemon, eh? I’m trying to imagine a Pokemon creature being brought to life with the realism-driven CG of this movie… and yeah, I think “gorgeous and terrifying” sounds spot-on.

The trailers and images we’ve seen from Skull Island so far have been fantastic, showing off a breathtaking landscape littered with massive skeletons. I can’t wait to see what kind of creatures Vogt-Roberts and his team have cooked up for us, and with the clear Apocalypse Now vibe that the movie is striving for, I have high hopes that this movie will be much more than your standard creature feature. And I’ll be sure to keep my eyes peeled for a Charizard cameo in the background.

Read more about Kong and the inhabitants of Skull Island in the latest issue of SFX magazine, on sale now. Buy future issues here.