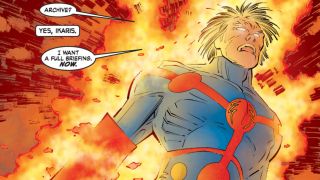 We’ve had MCU movies span years and even decades – as I’m sure Peggy Carter would tell you *sob* - but nothing like what Kevin Feige is teasing for The Eternals, Marvel’s next big thing coming our way in Phase 4. Not only is the head of Marvel Studios talking up a millenia-spanning run, he’s also opened up about why the next big superhero group on the block will draw more from the book of Guardians of the Galaxy rather than the Avengers.

Speaking to Collider, Feige reveals the thought process behind bringing the Eternals into the MCU now: “Everything after [Avengers] Endgame, and after Spider-Man: Far From Home, will be different and be unique, as we try to make every film.”

As you can probably tell by the name, it’s not too much of a stretch to see the group show their face everywhere from Ancient Greece to Avengers Tower. As Kirby himself explains in the comic, "The Eternals bred few in number and were immune from time and death. Like the gods, they lived apart from all other living beings.”

So, that’s that cleared up then. But one thing that might be on the mind of many Marvel fans, as it always in when a new hero or group arrives on the scene, is how will they be introduced? Feige is leaning more towards a Guardians-style entrance, with the team already formed, rather than a piece-by-piece build-up in the style of the Avengers, saying: “We like the idea of introducing an ensemble, doing an ensemble movie from the start, as opposed to building up as we did with the first Avengers. More like Guardians, not tonally, but in terms of introducing a new group of people.”

An invincible set of beings who will show up out of nowhere fully-formed, having been around for all of human history? It’s a tough sell. But then again, so was a talking raccoon and a tree dancing to Michael Jackson. I think Marvel can stick the landing – and then some, even if the Eternals release date is still just out-of-reach for the time being.

Whisper it, but this might be potentially be the most exciting of the new Marvel movies coming our way...