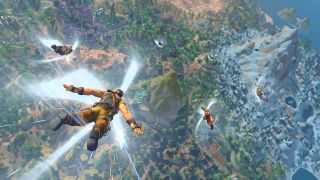 Realm Royale is, as its title suggests, a battle royale game from Hi-Rez Studios, the company behind Paladins and Smite. The multiplayer title launched on PC earlier this year, quickly reaching an impressive concurrent player count of 104,000 and, following a few more months in the oven, Realm Royale's closed beta has finally landed on PS4 and Xbox One.

The console closed beta runs on an exclusive, invite only basis right now, but today's your lucky day. We've got 15000 digital copies of the game to give away on PS4 and Xbox One, with codes for both European and US players on either side of the pond! All you need to do to earn yourself a place in Realm Royale right now is follow the instructions below, sign up, and select your platform of choice.

And that's it! Download Realm Royale on console, and you'll be free and ready to play in its matches of chicken-filled madness as much as you like. Be warned, though. This is still a closed beta, so you may encounter a few bugs here and there. Otherwise, let us know your thoughts after a few matches in the comments below, and we'll see you on the battlefield!

Heroic Leap Games welcomes new players to the Realm Royale console Closed Beta on Xbox One and PlayStation 4. During console Closed Beta, Realm Royale will enable crossplay between PC and Xbox players, allowing friends to stay better connected. To Redeem your code on PS4 or Xbox One, visit your console's store page and look for a "redeem code" or "use code" tab. Players can leave their feedback by joining the official Discord at discord.gg/RealmRoyale.