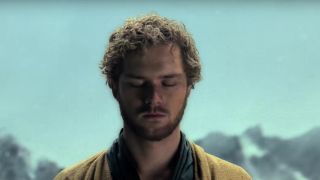 If you've already devoured Luke Cage, you may be looking forward to Marvel's next binge-worthy Netflix series. That'll be Iron Fist. The recent trailer for the martial arts wunderkind shows off a different side to Marvel's small screen universe. The fourth member of The Defenders won't be kicking ass in either Hell's Kitchen or Harlem. Nope, Danny Rand is gonna take out Manhattan's criminal element.

That's all we really knew about the show. Until this latest interview, that is. "We open with a very simple premise," says Jeph Loeb, the show's executive producer an Marvel TV head, "which is, at the age of 10, Danny vanished off the face of the Earth. The world believes that the son of a billionaire is gone. When he reappears at the beginning of the show, and he’s 25 years old. He announces, 'I’m here.' Has no proof, has no identity, has no DNA."

There's potential for this to be an absolute corker of an origin tale for the character. I mean, it's one thing for someone to have amnesia. That's standard fare in mystery plotting. But no DNA? What does that even mean? How the hell is he going to figure that out? Or experience the joys of getting a driver's license? What Finn Jones - who plays the character - says only adds to that. He says Danny is "innocent and he’s pure. He hasn’t been brought up in this very materialist, dog-eat-dog world, which then suddenly he finds himself in."

Again, I can't help but picture this innocent, pure soul lining up at the DMV. But it's more likely that he'll end up accidentally beating the crap out of someone by mistake due a 'simple misunderstanding' over street slang.