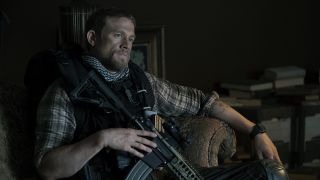 Ever wondered what it's like to be a movie star? Not just the A-list stuff, attending premieres, festivals and lunches; but the reality of making a Hollywood blockbuster. Every month, sister publication Total Film magazine talks to famous actors about their experiences on-set. The highs, the lows, the meditation, the injuries… it's a no-holds barred account of life on location; albeit a tropical isle, or industrial parking lot. First up, Pacific Rim and Triple Frontier star Charlie Hunnam explains why he avoids food during scenes, his on-set survival kit, and worst filming experience ever.

What’s the first thing you do when you get to set?

I go to make-up. But then I do a little meditation to get myself focused for the task of the day. I do some voice warm-ups… I suppose you could describe it as finding my voice.

I don’t like to eat once a scene has started because I feel like it will change my energy. I don’t ever take my phone to set because one of the aspects of acting is dominion over emotional state. And the potential for your emotional state to be corrupted by some sort of outside influence via the phone – it’s just too big of a risk to take.

Hot or a cold lunch?

Ooh, hot lunch. I mean, I draw the line at dessert. Sometimes I’m trying to do something specific with my diet or I just frankly don’t like the catering and I’ll bring my own food. I would rather get up an hour early and prepare food for myself for the day than feel like I was compromising and eating something that’s not going to be good for me.

On location or soundstage?

I always feel the most relaxed and grounded when I’m outside in the natural world. But the flipside of that is the environment is not nearly as controlled. I had to do an enormous amount of ADR [re-recording dialogue] on Triple Frontier because it was very hard to control sound in [the jungles of Hawaii]. I found the days to be very arduous on this film… we were doing a lot of running up mountains, through rivers. And honestly, although I liked everybody enormously, there’s something fatiguing about being in a group.

So who was the alpha male on this?

[laughs and pauses] I suppose Pedro Pascal (Star Wars: The Mandalorian) is certainly the one of the group who makes his presence most felt. You could put it that way!

What do you take on set with you?

I’m a little bit of a grandma with a bag. I try not to use single-serving bottles of water so I always take at least three litres of water in bottles that I always fill up from the a tap before work. I always have my script. And I always have snacks and an iPod because I listen to music a lot while I work.

The Lost City of Z – I just had a really peak experience. It’s probably the only time where my aspiration for the work and the manifestation of the work aligned. And Sons of Anarchy, just because of the experience I had with the guys.

Pacific Rim. I was in this robot wearing this suit that’s very, very heavy and uncomfortable. And I spent five weeks in that contraption, sometimes for 16 hours a day. I always roll my eyes when any actor talks about the difficulty of filming. It’s like The Revenant  – yeah, yeah. Sure. It was fucking cold. Get over it. But I’ll tell you, by the third week, when I’d ruptured a couple of discs in my back, which is really no joke… that was incredibly unpleasant.

Ever stolen anything from a film set?

Yeah. Tonnes of shit. All the time. When Sons finished, I just took everything that wasn’t nailed down. I took the motorbike, my cards, all my rings, and tonnes of costume. I just stole some stuff off the last film I just did with Guy [Ritchie – Toff Guys]. He had me wearing some really snappy outfits, so I pilfered a couple of choice items.

Never, ever go to the wrap party. I love a quick goodbye, and a firm handshake at the end of a job. [laughs] Yeah, a French exit – we don’t need to do a full-on, four-hour, drunken, sloppy goodbye.

Triple Frontier is out now on Netflix. This feature regularly appears in our sister publication Total Film magazine. Pick up a copy now or save up to 58% on a print and digital subscription so you never miss an issue.