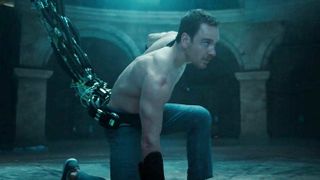 Strap yourself into your comfiest Animus, because The Game Awards 2016 gave us not one, but two clips from the upcoming Assassin's Creed movie to enjoy. First up, something a little familiar:

Yup, it's that same scene we've glimpsed in every trailer for this movie, showing Michael Fassbender getting plugged into the far more elaborate (and painful) version of the Animus that the film is using. We've seen bits and pieces of this before, but now we get to see the whole process. It does not seem like fun.

Next up, we go back in time to Fassbender's ancestor (Fasscestor?), Aguilar. He and his Assassin friend are chasing down a cart carrying a young boy for some mysterious reason, and while it lacks the vroom vroom and explosions of modern car chases, it's still a pretty exciting spectacle to behold:

We're less than a month away from finding out if Assassin's Creed will break the string of bad video game movies. If it doesn't, just plug me into an Animus so I can go back to the days of Raul Julia in Street Fighter, okay?