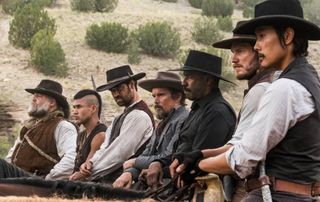 Watch the trailer for Training Day director Antoine Fuqua’s Magnificent Seven reboot for even twenty seconds and the first thing that’ll hit you in the eyes like a bullet is its cast. Denzel Washington heads up a team of rogues that just happens to include Chris Pratt, Ethan Hawke and Daredevil’s Vincent D’Onofrio. But, as the leader of a crew that includes a Native American warrior, a Korean assassin and a Hispanic outlaw, Washington is also leading one of the most diverse casts in Hollywood in years. It turns out this wasn’t always the case.

“It’s funny, when I was in a room with MGM and everyone we were just talking about the cast,” Fuqua says in an interview in the new issue of Total Film. “Right away, we went down the list of actors... Denzel’s name wasn’t on that list. It was just a lot of actors. Most of them were white. I just said, ‘I think this movie needs an event. It needs something more than just the title. It needs to be something that everyone can grab on to. Denzel would be amazing as Yul Brynner, that character, coming over the hill in all-black and looking like a badass...’”

“It was like a hush went over the room. I got excited,” he continues. “I got that feeling in my stomach that he would make it special. And then the fact that he was black kind of came up in the room. I just think of him as a great actor. I didn’t think about colour. People asked me whether I was going to make an issue out of it. I said, ‘No. Let people who come to the theatres paint their own picture. You already know he’s black. I don’t need to point that out.’ And then I started thinking about making it more diverse after I thought about Denzel.”

Fuqua is also making sure his female characters aren’t just damsels in distress for this 21st century Western. Haley Bennett takes on the role of frontierswoman Emma Cullen who can handle herself, thank you very much. “She picks up her gun and she’s involved in battles. She’s right there,” Fuqua confirms. “It is important to do that. It is important to not have a woman in distress or just there for a sexual object – all those things help make it feel contemporary.”

Read the full interview with Antoine Fuqua in the new issue of Total Film magazine out on today or subscribe to further issues here.