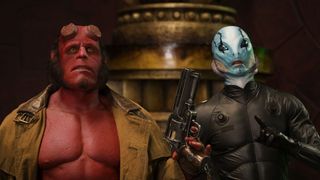 A Hellboy reboot is on the way, we know that much, but what else has been revealed about the reboot, tentatively titled Hellboy: Rise of the Blood Queen? For one thing, it’s following in the comic book footsteps of Deadpool and Logan by shooting for an R-rating. It also sounds like the movie is going for a much darker tone than the Perlman/GDT entries.

Speaking to Silver Screen Beat, writer Andrew Cosby gave up some details on what can be expected from the reboot starring everyone’s favourite chain-smoking demon. “I can’t really talk about specifics with regard to the story, which they’re keeping a pretty tight lid on at the moment, but I can say that this is a darker, more gruesome version of Hellboy,” Cosby said.

Cosby went on to say that horror will be a major influence on the upcoming reboot, with director Neil Marshall also fully on-board with could prove to be a major departure from what made the first two Hellboy movies such cult classics, but keeping more in line with their comic book source material.

Cosby stated, “Neil [Marshall] said from the very beginning that he wanted to walk a razor’s edge between horror and comic book movie, which was music to my ears, because that’s what I was shooting for in the script, and precisely what [Mike] Mignola does so well with the comics.”

So – a horror Hellboy. It’ll definitely feel like a reboot rather than a continuation of the old Hellboy movies, but is it a step too far for some fans? Let us know in the comments!