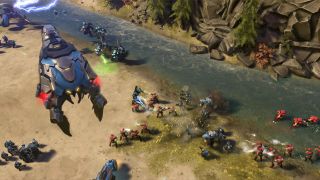 Halo Wars 2 will get a multiplayer open beta from Monday, June 13 to June 20 on Xbox One, according to the Xbox Store. The store page for the beta client isn't accessible through a standard search, but that didn't keep Reddit user TheLittleMoa from digging it up.

Microsoft's E3 press conference is set for Monday, so this was probably meant to be one of those "...and you can download it right now!" type announcements. It doesn't sound like the beta will include any single-player content, but you'll be able to try as much multiplayer as you like throughout the week. The Xbox Store page even came with a crop of fresh screenshots.

Halo Wars 2 is planned for release in fall on both Xbox One and PC, but I'm not seeing any mention of a PC version of the open beta here. That could change once it's actually announced, of course.

Check out every announcement and full summary details on our Microsoft E3 press conference page.