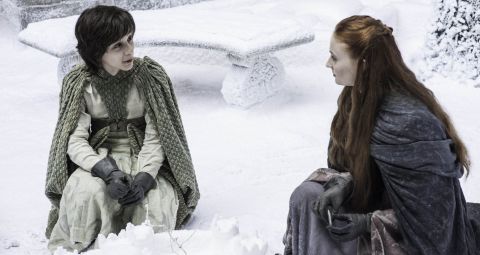 And so Lysa Arryn, the craziest mother in Westeros – no mean feat considering the competition – is no more.

She's unlikely to be missed by many. Oh, certainly young Robin will miss the milk, but even he'd have to admit it's probably for the best that Ma has gone to meet her seven makers.

But the death of Lysa is more than the opportunistic murder of a wide-eyed lunatic. Rather, it's the conclusion of a conspiracy that stretches back to before the very first episode of Game Of Thrones. Lest we forget, it was Lysa, at the prompting of Littlefinger, who murdered her husband John Arryn and set the whole bloody mess that came after into action.

That's right. No Lysa, no Ned as Hand, no War of the Five Kings, no Red Wedding, no nothing. Almost everything that has happened so far has directly come from Lysa's inability to get over her childhood crush on the little boy who came to stay at Riverrun all those years ago.

Ah yes, Littlefinger. We've seen the real Petyr Baelish this season, and he's terrifying. Using little more than the love of a cracked noblewoman and sheer force of will, he's methodically torn the seven kingdoms to pieces, just so he can sit on top of the rubble when it's all over.

Littlefinger's long game has been played with a master's hand. His murder of Lysa in front of Sansa is arguably his first major slip up. After all, there's no guarantee that Sansa won't give him up as soon as she has the chance, especially now she's seen what he's capable of.

Tyrion and Cersei find champions, Brienne gets a lead in the hunt for Arya, and Sansa has a brush with the Moon Door.

And yet, if there's anyone on Westeros who can magic away a murder it's Littlefinger. The man with the Mockingbird sigil is, after all, the ultimate mimic. He played the role of loving husband perfectly, right up to the point he didn't need to any more. He's played the devoted civil servant, the friend to the Lannisters, the saviour of Sansa and the ultimate player of the game of thrones. Who knows what he'll play next?

Littlefinger is far from the only character playing the mockingbird in this episode. Out on the road Arya could almost be a member of House Clegane, taking murder-tips from the Hound on finding the heart of her victims. At the wall Jon is once again singing the song of the Night's Watch, although he's having trouble getting his voice heard after spending so long pretending he wasn't a crow at all.

Down in King's Landing, everybody is pretending to be somebody they're not. Tyrion and Cersei, in their efforts to take sibling rivalry to a whole new level, both recruited their champions for the upcoming trial by combat, and it was fascinating to contrast how they found their fighters.

For Cersei, it's simply a case of thinking like Tywin. Literally striding through blood and guts to appoint the Mountain as her champion, you could almost see the cogs whirring in her head. What would Tywin do? Probably find the biggest, nastiest bastard in the Seven Kingdoms to fight for him. And thus it was.

Tyrion, meanwhile, was having all sorts of trouble finding any friends. Playing up to his new role as the most hated Lannister in Westeros isn't sitting well. His old brother-in-arms Bronn, busying himself pretending to be a lord (another mockingbird) can't event help. In the end Oberyn Martell, the man who saw the baby that Tyrion had been and not the monster it was claimed he was, comes to his rescue.

We're not sure what good it will do him, what with having the Mountain to fight and all, but at least Tyrion didn't have to do it himself. A man can pretend to be many things, but pretence tends to fly out the window when there's steel swinging at his face.