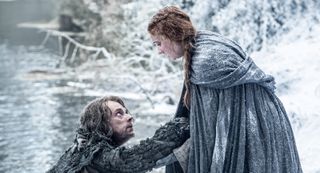 Game of Thrones is not exactly what you'd call a light-hearted show; there's war, rape, and plenty of death (often of our favourite characters) to go round. Season 5 was particularly grim in those respects, but apparently the upcoming batch of episodes won't go down such a dark path (although it's probably wise not to expect a laugh-a-minute comedy).

"Season 5 was about taking characters to the brink - and for certain characters like Stannis and Jon, destroying them altogether", writer-producer Bryan Cogman told Entertainment Weekly. "We left our central characters in huge moments of crisis and at their lowest points last year. All of them are now trying to rebuild their lives. Season 5 was in many ways our darkest. This season is still very dark, very intense, but it's very much a next act."

Cogman also noted that while there will be some callbacks to the books, season 6 is definitely an alternate universe; "It was the hardest season to write for that very reason. While we're still drawing from a lot of situations and arcs in the books, it's obviously not a direct adaptation of any of the books this year".

"I will say you'll see character versions and interpretations that are in some of the previous books that we hadn't gotten to yet. I think of it as Westeros 2 - the alternate universe version of Westeros. There's the book universe and a show universe and this is what happens in the show universe".

While it will be interesting to see just which plotlines from the books Cogman is referring to, part of the excitement of the upcoming season is that we don't know what to expect now the show is going off book. Thankfully, the wait is almost over...

Season 6 of Game of Thrones premieres on HBO on April 24, 2016 in the US, and airs on Sky Atlantic the next day in the UK.