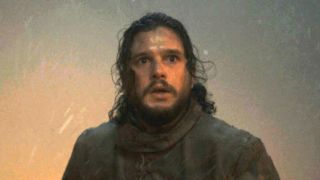 "This is survival horror. That’s the whole episode for me," Sapochnik said. "What we realized is you look at like Assault on Precinct 13 - movies where a group is under siege - usually there’s an ensemble cast and a central theme in there. So I’ve been trying to work out whose story this is. That’s different than the stuff I’ve done previously which was generally from Jon [Snow]’s perspective.

"Here I’ve got 20-some cast members and everyone would like it to be their scene. That’s complicated because I find the best battle sequences are when you have a strong point of view, and here the point of view is objective even when you go from one person’s story to another. Because when you’re cutting back and forth, [the perspective] becomes objective whether you want it to or not. I keep thinking, 'Whose story am I telling right now? And what restrictions does that place on me that become a good thing?'"

Sapochnik said he spent most of his time on the episode making sure not to let the audience feel "battle fatigue" after twenty desensitizing minutes of clashing swords and spilling blood - like when the Transformers have been punching each other for so long that you just see scintillating metal everywhere even after you leave the theater. He looked to another source of cinematic inspiration.

"For my reference point I watched [The Lord of the Rings: The Two Towers] because the siege is a 40-minute sequence, but it’s actually three different battles in three different places intercut. That was the biggest thing I could think of that was contemporary. I was trying to get a sense of when do you tire out. I think we’re going to blow past that. It feels like the only way to really approach it properly is take every sequence and ask yourself: 'Why would I care to keep watching?' One thing I found is the less action - the less fighting - you can have in a sequence, the better."

Want to blow your mind? Follow this wild theory that suggests Melisandre was somehow in the second episode.