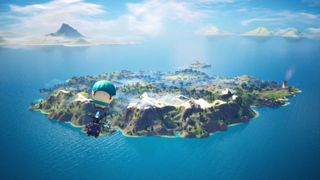 Split-screen could be coming to Fortnite as part of its new update later today, allowing two players to enjoy the game's battle royale mode on the same screen.

The leaked info derives from a support page for Fortnite split-screen (via FortniteNews), which accidentally went live before the latest set of Fortnite patch notes rolled out across the game proper, revealing that the PS4 and Xbox One versions of the game will now support local split-screen play.

Fortnite's The End event was watched by over six million people, and even Elon Musk got involved

According to the leak, split-screen will only be compatible with Duos and Squads mode on Fortnite Battle Royale, and doesn't support the game's Creative, Solos or Limited Time Modes, nor its PvE slate of Save the World content.

"The lobby and all sub-menus are not shared and split-screen will only work while in a match", continues the page, clarifying that "this does not allow players to share inventory", suggesting that your locker room of outfits and other cosmetics can't be donned by another local player.

Epic Games has confirmed it'll be revealing new Fortnite news during The Game Awards ceremony later today, so it's entirely possible that a splitscreen announcement is scheduled for then.

Fortnite chapter 2 season 1 may have been extended into 2020, but this rumored new addition to battle royale sounds like the perfect feature for the Christmas hols, bringing families together through repeated fights to the death on the most famous virtual island in the world.

Check out the biggest new games of 2019 still on the way, or watch the Release Radar video below for a guide to everything else out this week.