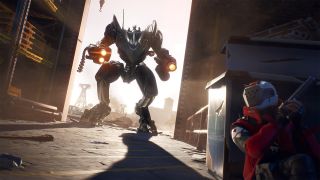 Fortnite season 10 is finally here, and introduces a whole bunch of new ways to play the battle royale game that has just enjoyed its first World Cup event in New York. As revealed in the latest Fortnite patch notes (the game itself is down for maintenance right now), one major new selling point for season 10 is the Brute; a two-man war machine that can lay waste to buildings, vehicles, and other enemy players.

Clearly inspired by the Titans from Titanfall 2, the appearance of the Brute is somewhat ironic given that Apex Legends, Respawn's own battle royale game set in the world of Titanfall, has yet to feature any kind of vehicle whatsoever.

Regardless, there's already a concern amongst players about the kind of combat advantage that the Brute brings to those who manage to find one on the map, as Fortnite has previously had trouble with balancing when it introduced the Plane vehicle back in season 7 last year.

Are the Fortnite servers down? Here's when the season 10 downtime will begin

Epic explains that "if two players are operating [the Brute], one (the driver) controls movement, while the other (the gunner) rains down missiles and shotgun shots." The  driver is able to dash, jump, stomp, and harvest, while the gunner can focus solely on combat.

If 200 of any one material is harvested, the stack can be consumed by the Brute to create a "personal overshield for 5 seconds to protect you in the mech", as both driver and gunner are otherwise still vulnerable to gunfire even while inside the vehicle.

Judging from the latest Fortnite Season X trailer, it looks like the Brute (sorry, B.R.U.T.E) drops down across the map at random locations, but the frequency and pattern of these drops are unclear. I guess we'll have to find out for ourselves once Epic brings the game back online and season 10 begins in earnest.

For more, check out the best games like Fortnite while you're waiting for season 10, or watch the video below for a guide to everything else out this week.