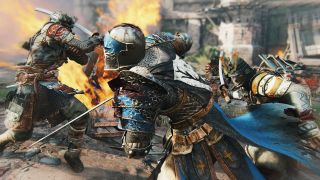 For Honor's closed alpha will begin on Thursday, and it looks like it won't be one of those teensy tiny pared-down tech tests that barely justify their gigabytes. You'll be able to play as two of the four heroes from each of the three factions, try out three maps, and play three of the five currently planned multiplayer modes (1v1, 2v2, and 4v4). Here's the first of six trailers for all the available hero classes, to get you in the fighting spirit.

The closed alpha will also implement a limited version of the full game's progression system. Players will be able to unlock new abilities, equipment, and cosmetic options as they play. If you haven't already, make sure you register at the game's official website for a chance to get a slot.