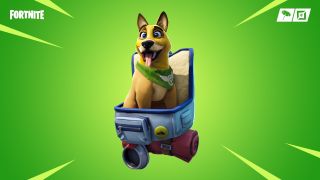 Epic Games recently announced a new pet dog by the name of Gunner was being added to Fortnite’s store for the price tag of 1000 V bucks (£7.99/$9.99). But the new pupper has already been removed from the store after considerable backlash. Players expressed their anger and disappointment at how similar the new skin looked to a previous poochy who was added in a Battle Pass. After Gunner was removed from the store, Epic apologised with the promise of issuing a full refund with an additional 200 V bucks to anyone who purchased the doggo.

Anyone who purchased Gunner and refunds it prior to this make-good will instead receive 200 V-bucks and a replacement Refund Token that can be put towards any eligible items that were purchased within the past 30 days.August 14, 2019

Players were quick to address the fact that Gunner looks incredibly similar to Bonesy, a pet who came to Fortnite in the Season 6 Battle Pass. If you compare the two, they’re basically identical save for Gunner’s bandana and what appears to be a yellow mask on his face. Without much difference between them, anger also stemmed from Gunner’s price tag, which almost amounts to the same cost of an entire Battle Pass that goes for 950 V bucks. Without much to differentiate the two pet skins, users on reddit also shared their anger at dropping that amount of coin for what is essentially a reskin of an already existing pet.

I don’t see a difference at all pic.twitter.com/2IaKDHrhxCAugust 14, 2019

Lots of skins for player characters often wrack up 1000+ V bucks, but at least they look significantly different to get more bang for your buck. Hopefully any future pets will have unique designs that will actually be worth the price tag. Season 10 recently kicked off with some big changes in the world of Fortnite with the addition of new locations, missions, and mechs which have recently been nerfed.

Getting stuck into Fortnite? Here's everything you need to know about Fortnite Season 10.