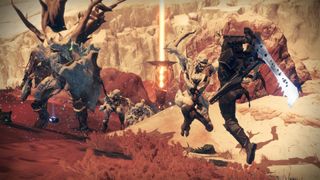 The latest Destiny 2 expansion is now live across PS4, Xbox One, and PC, and you can bet your bottom dollar that Warmind brings a host of new collectibles for Guardians to locate and uncover in the quest for more Exotic gear and loot, one of which are the Lost Memory Fragments.

How to get the Worldline Zero exotic sword and G-335 Anseris Overdrive Exotic Sparrow in Destiny 2: Warmind

These are small holographic discs which are found around the area of Mars and can be shot at a few times to destroy and bank into your inventory. They're not just meaningless excuses for busywork, either; collect them all, and you can head to two previously locked caches to gain some seriously cool upgrades for your Guardian.

Getting every Fragment isn't a straightforward collecathon, however, as these discs radiate in different colours, and you'll need to match your weapon's element to their respective colours in order to be able to shoot them up.

That last one, the red Fragments, require Warmind's new limited weapon, the Valkyrie javelin, which can be found at various charging ports during Public Events on Mars, and is available to use for a limited time before running out, so you need to be quick once you've picked it up.

You'll receive a Mars Token for every Lost Memory Fragment you collect, but finding 35 gives you access to Warmind's exclusive Exotic sword, Worldline Zero, while collecting all 45 unlocks the expansion's exotic Sparrow, the G-335 Anseris Overdrive.

Many of these Fragments are hidden quite inconspicuously in all corners of the Mars environment, but many Destiny 2 veterans have already catalogued every location and recorded their findings for your benefit.

The following guide videos from Esoterickk show footage of where you can find each Fragment in Mars, categorised by their situated zones, so do be sure to watch on below if you're trying to collect them all, and consider showing your thanks to the channel with a like or subscription.

And that should be that! Once you've found all of them, you're free to go and collect the Worldine Zero and Anseris Overdrive from two separate caches, found in Mars' Core Terminus Lost Sector and Olympus Descent respectively.

Following that, you can move on to something new to do in Warmind, like finding the expansion's most crowd-pleasing returning weapon via our Sleeper Simulant exotic guide.

For more Destiny 2: Warmind help, you can check out our complete Destiny 2 walkthrough guide, which now includes tips for every mission of the expansion's campaign.