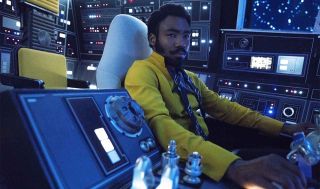 Nothing is going to wipe that smug grin off of Han Solo’s face. Solo: A Star Wars Story seems to be going great guns if the reviews are any indication. Our own review called it “far better than we had any right to expect” and, you know what? That’s an opinion shared pretty much throughout the galaxy. Read to find out what everyone else is saying about the Han Solo movie, but be warned, while there’s no spoilers here, if you want to go into the movie completely blind, you might want to skip this article.

“We can tell that the film is bound eventually to turn into a tale of plucky rebels taking on oppressive overlords. Han is warned early on by Woody Harrelson’s Tobias to “assume everyone will betray you… then you won’t be disappointed". It’s not advice that Han can follow. His real secret is that despite his outlaw posturing, he’s the “good guy” who will always put justice above self-interest.

There is nothing much here that will surprise Star Wars fans but there is nothing that should disappoint them either. No lightsabers are on display and nor is there any sign of Darth Vader but Solo: A Star Wars Story delivers exactly what you want and expect from a movie about the young Han Solo.”

“It’s no spoiler to say that the Atlanta star is easily the best thing in this good-not-great movie. More than any big action set piece or narrative double cross (and there are plenty of them thanks to a smooth crime boss played by Paul Bettany), it’s Glover’s mack-daddy, Colt 45 swagger as the rakish gambler formerly played by Billy Dee Williams that will be the thing you’ll be buzzing about after the lights come up (well, that and how much you’d rather see his standalone origin story).”

Does it belong in the Star Wars canon? Absolutely - The Guardian (4/5)

“Solo: A Star Wars Story is a crackingly enjoyable adventure which frankly deserves full episode status in the great franchise, not just one of these intermittent place-holding iterations. Ron Howard was born to direct it. Who’s next for the saga? Zemeckis? Spielberg?

There’s a terrific ensemble cast-dynamic and an effortless channelling of the spirit of Episodes IV to VI from father-and-son screenwriting team Lawrence and Jonathan Kasdan who should really be allowed to get their teeth into the stories’ daddy issues and Freudian anxieties.”

“If only Solo and Qi’ra had a fraction of that chemistry. For a film that is constantly nudging us in the ribs with allusions to the original Star Wars trilogy, it does Solo few favors to bring to mind the incendiary interplay between Ford and Carrie Fisher that gave those films so many of their standout moments. Clarke and Ehrenreich have little such spark, although that seems less the fault of the actors than the unimaginative relationship they’re given to work with. Ehrenreich in particular is enduringly watchable: He nails Ford’s cocky gait, his roguish eye-twinkle, his puffed-cheeked finger-pointing, and while the performance may initially come across as a highly skilled bit of mimicry, by the film’s end he’s managed to give the role a satisfying new spin.”

“The performances are largely excellent. Harrelson’s Beckett is better and more lived-in than his Haymitch from the Hunger Games movies — he’s always striving to find new modes of weirdness. The only thing wrong with Thandie Newton’s performance is that there’s not enough of it. I’d watch her in anything. I’m not entirely sure about Emilia Clarke, but that mostly because Qi’ra — who comes back into the movie — is such an unknown quantity.”