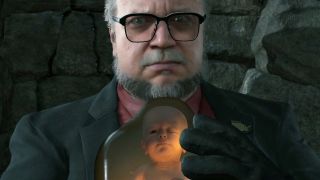 Guillermo del Toro once said his role in Death Stranding was that of "a puppet", and now we know exactly what he meant. After unveiling the Death Stranding release date via a new trailer earlier this week, Hideo Kojima has been using his personal Twitter account to share additional bits of information about the game - like how if you see a mountain, you can climb it - and its cast. In one Tweet he confirmed that at least two characters in the game with the likenesses of famous people aren't actually be performed by those people. In other words, they're puppets.

I asked my bestie, Nicolas, to be “HEARTMAN” in DS as special guest. We 3D scanned his head, body, and facial expressions to make his 3D model, but his acting and voice are done by a different performer, same as with Guillermo. 👍🌈🦀🐟🐋☔️ pic.twitter.com/wOGt0LfX89May 29, 2019

Heartman (who we saw for the first time in that trailer) has the likeness of Nicolas Winding Refn, the Danish director of Drive, and Deadman (who we first met way back in 2016) has the likeness of del Toro. But they're both just "puppets" for other actors to bring to life in the game. I bet it's strange for Refn and del Toro to witness near photo-realistic versions of themselves talking like strangers in Death Stranding, but Hideo Kojima does always seems eager to add more weirdness to the world.

Don't worry, this doesn't mean Norman Reedus' Sam and Mads Mikkelsen's Cliff will start behaving like other people in the actual game. We've seen enough behind-the-scenes shots of both of them in the performance capture studio to know that they fully embody their characters, barring anything strange happening in the events of Death Stranding itself. Though if some of the more bizarre Death Stranding theories turn out to be true, Sam and Cliff could eventually be revealed as a pair of sperm whales dying together on a beach or something.

See what else is on the way with our list of E3 2019 games. Or check out a different kind of cinematic adventure available on PS4 right now with our Blood & Truth review.