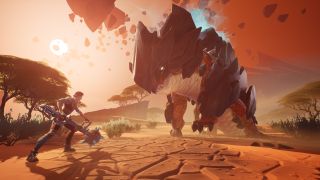 Whether you're after a Furious Rage Scale, Scorch Scale, Psionic Scale or any of the other Dauntless Scales, you've come to the right place. Scales in Dauntless are used alongside Arcstones and Orbs to upgrade your weapons and armor, so they're a crucial resource to farm if you want to reach the endgame of Dauntless. No matter which Scale you're after, here's a complete guide on how to get Dauntless Scales.

How to get Scales in Dauntless

There's a lot of different Scales to find in Dauntless, and each one has a different method used to acquire it. You need to take on a variety of different behemoths, and for some of them you need to simply kill it, while others require you to destroy different parts. Here's how to get all the Scales, from the Dauntless Furious Rage Scale to the Dauntless Scorch Scale.

One of the most popular Scales in Dauntless is the Furious Rage Scale, which you need for some vital upgrades with Gnasher gear. Unfortunately, it's a rare drop from the Ragetail Gnasher, but you only have to kill it to try and obtain one, not focus on a specific part. It might take a few Ragetail Gnasher hunts to obtain a Furious Rage Scale, so keep at it if you don't get lucky straight away. You might even get a Ragesoul Shard on Heroic difficulty.

The Scorch Scale is used to craft Hellion gear so as you'd expect, you need to slay a Scorchstone Hellion to get your hands on one. It's another rare drop but again, there's no specific parts you need to target. If you're fighting a Heroic version, there's also a chance of obtaining a Hellstone Shard.

The Thundering Scale follows the same pattern in Dauntless. You have to kill a Drask for this one, which is significantly easier than some of the other behemoths mentioned, so the Thundering Scale can be easier to farm. Heroic Drask fights can also drop Thundersoul Shards when you reach higher levels.

Adamantine Scales can only be acquired from Rockfall Skarns, which are exclusive to The Maelstrom region of the game, which is essentially the endgame. These tough behemoths have a number of rare drops, and you can get Adamantine Scales from slaying them completely.

If you're searching for Icy Frostback Scales, then you need to start hunting Frostback Pangars. These huge icy behemoths are incredibly tough, so make sure you're stacked up with fire weaponry and like the Rockfall Skarn, there's plenty of rare drops to acquire alongside Icy Frostback Scales.

Here's a complete list of all Dauntless Scales and how to acquire them: