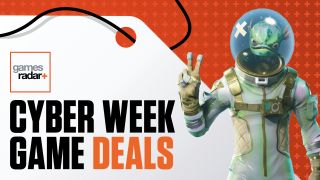 Cyber Monday may be over in much of the world, but there are still a few Cyber Week game deals to be had on all things Nintendo Switch, PS4 Pro, and Xbox One X if you act fast. We're staying on top of every deal to make sure everything you see in our illustrious list is still worth clicking, and for those with nerves of steel some retailers are even shaving an extra few dollars and cents off prices as sale season comes to a close. Whether you need games, accessories, controllers or the consoles themselves, you'll find what you need below.

Cyber Week Deals Around The Web

Since Cyber Monday is over, this will be your last chance to grab game deals at a great price, whether it's for you or your loved ones this holiday season. We predict the best bargains will disappear completely before or by December 6, so don't hesitate and act quick. The deals most likely to disappear before you can say "savings" are Nintendo Switch Cyber Week price cuts (as Nintendo rarely discounts its products) or Cyber Week TV deals - expect them to sell out fast.

All these deals across the web may seem a little overwhelming, but we've done all the heavy lifting for you. You'll find the best remaining Cyber Week game deals below, just a quick scroll away. Yup, we're just talking games, consoles, accessories, controllers, online subscriptions, Lego sets, and more, all on sale and all for you. The Cyber Week board game deals and Cyber Week Lego deals are some of the best we've seen all year - the pricey products are on some serious discount right now, and it won't last There's never been a better opportunity to get a gaming seat than with these Cyber Week gaming chair deals.

In a hurry? Here are the top deals right now

1TB Xbox One S All-Digital with Fortnite, Sea of Thieves and Minecraft | $189 at Walmart (save $60)
It was predicted to come right down in price, and the All-Digital Xbox has kept it as we go deeper into Cyber Week.View Deal

Red Dead Redemption 2 on Xbox One and PS4 | $39.99 at Amazon
Rockstar's open-world cowboy epic is arguably the best-looking game of all-time and the perfect way to show off a new 4K TV. This better-than-half-price deal is utterly essential.View Deal

Apple iPad 32GB Wi-Fi + Cellular- Gold | $329 at Walmart
A saving of over $100 on this 32GB 6th generation Apple iPad with Cellular and WiFi support. You don't want to miss out on this Cyber Week deal!View Deal

Apple Macbook Air 13 inch 128GB $749.99 Sure, it's not a console, but this is an incredible deal on the top-rated Apple Macbook Air laptop that will sell out super fast as an Amazon 'deal of the day'. You won't find a better price. View Deal

PlayStation VR bundle with 2 games | $329 at Amazon
There's $100 off this fantastic VR starter bundle, which comes with Blood and Truth and Everybody's Golf. You get all the kit you need here to go fully VR on PS4.View Deal

The Outer Worlds on Xbox One | $39.99 at Amazon (was $59.99)
A decent saving of $15 on the biggest and best RPG of the last few months. If you're looking for a game to sink months into, this is good value.View Deal

Madden NFL 20 on Xbox One for $34.99 (was $59.99)
EA's much-lauded football game has been one of the most-clicked items on our site all weekend, so draw your own conclusions on how great this Xbox One deal is.View Deal

Borderlands 3 on PS4 | $34.99 at Amazon (was $59.99)
Grab the digital edition code of this super, new open-world RPG for half price. That's a fantastic price for anyone looking to shoot with friends.View Deal

Elder Scrolls 5: Skyrim Special Edition (PS4) | $19.99 at Walmart (save 50%)
Are you that one person who has never played Skyrim, arguably one of the most iconic RPGs of the last 10 years? If so, correct that mistake by snapping this up for half-price.View Deal

Sega Genesis Mini | $49 at Amazon (save $30)
Now nearly half price at both Amazon and Walmart, this features 42 of your favorite Genesis titles. It's a fun retro console with improved save features and upgraded widescreen display. View Deal

PS4 DualShock 4 controller (Black) | $38.99 at Walmart (save $20)
This is the official controller for PlayStation 4, in the standard black color that will match just about anything. It's 33% off.View Deal

Xbox One wireless controller | $39 at Walmart (was $59.99)
Grab one of the best video game controllers ever at a 33% less. Compatible with Xbox One, PC, and future Xbox consoles. View Deal

Razer Deathadder Elite gaming mouse | $29.99 at Amazon (was $59.99)
Simply, one of the best gaming mice you can buy, and this is the lowest price it has ever been by at least $5. If you have a gaming PC, you need one of these.View Deal

Razer Kraken 2019 gaming headset | $59.99 at Amazon (was $79.99)
A superb mid-range headset, and one of our favorite picks. You're saving $30 on the list price here, which makes it a real bargain. Stocks were low as we typed this, so make sure to check.View Deal

Google Home Mini | $19 at Walmart (save over 60%)
Essentially, you're getting a Home Mini for less than half price. And at $19, everyone needs one of these personal assistants / speaker / alarm clock in their homes.View Deal

There're no doors in cyberspace, so Cyber Week doesn't lean so hard on the doorbuster deals. You still have plenty of time to take advantage of all the Cyber Week game deals!