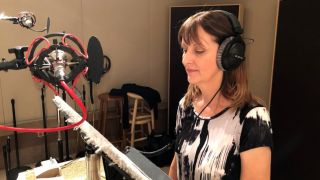 Voice actress Kia Huntzinger recorded her lines for Command & Conquer 25 years ago, but somewhere in that span of time, the tapes were lost. Thus, when EA began developing the remaster, they took the sensible approach and hired Huntzinger to reprise her role. Fortunately, the actress sounds nearly identical to how she used to.

Check out this comparison video of her lines as recorded in 1995 and 2019:

In a developer update, Producer Jim Vessella regales readers with the story of Huntzinger's work on Command & Conquer, via composer Frank Klepacki. Huntzinger was working at Westwood Studios at the time, frequently leaving voicemails and paging the company intercom.

According to Klepacki's story, Audio Director Paul Mudra found her voice fitting to the role of EVA and Huntzinger eagerly accepted the job. As Westwood was still a young studio at the time, the lines were recorded in a padded closet.

The remaster is being handled by Petroglyph Studio, which was formed by Westwood Studios employees who resigned as EA shut down Westwood Pacific. Needless to say, Huntzinger likely won't be recording her lines in a broom closet this time around.

Command & Conquer: Remastered will include the original game as well as the Red Alert spin-off. EA has chosen to carry over the legacy work for Red Alert's announcer, as the original voice actor, Martin Alper, who was also President of Virgin Interactive at the time, sadly passed away in 2015.

25 years after the original Command & Conquer, here are the 30 best PC games to play right now.