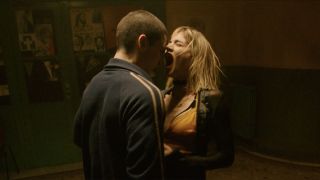 Few filmmakers have the power to tease, torment, and shock like Gaspar Noé. The Argentinian provocateur behind ultra-violent, ultra-depraved, ultra-lurid features Irreversible, Enter the Void and atypically tepid 3D sex movie Love has always known how to push buttons. But the biggest shock of Noé’s latest film Climax, which premiered last night in the Director’s Fortnight strand of the Cannes Film Festival, is that he’s reignited the creative spark behind his international notoriety.

Setting the stage by echoing Irreversible’s chronological mischief, structurally it’s as intrepid as anything in Noé’s filmography. A series of talking head recordings follow, establishing a colourful mix of twenty-something characters, and providing a handy checklist of reference points for what we’re about to watch via copies of Possession, Suspiria, Labyrinth Man (the French title of Eraserhead), and more stacked up on either side of the static CRT TV.

Then, in the kind of sterile hall you can imagine a weekly game of bingo taking place (the film’s single location setting), an incredibly dynamic and thrillingly choreographed one shot dance sequence explodes off the screen for the best part of 20 unbroken minutes. Performed by the 30-odd real life dancers who fill the ranks of the cast, it’s bravura stuff, the camera fixed on impossibly limber bodies as they krump, flex, and gyrate to a pulsating, and near omnipresent, dance soundtrack populated by the likes of Daft Punk and Aphex Twin.

As if to further confirm the film’s singularly idiosyncratic structure, the garish opening titles flash on screen a full 45 minutes into the film along with the declaration “a French movie and proud of it”. It’s only then that Climax finally takes a breather, following the closest the film has to a central character, Sofia Boutella’s Selva, as she does the rounds on the dance floor, cosying up to her boyfriend, checking in on the mother of the group and her young son (let’s call him Chekov’s child) and liberally dipping a glass into the Sangria. With rehearsals over for the day, the troupe have nothing left to do but dance and drink. But nothing is ever that wholesome in the Noé-verse. As their behaviour gets more erratic, more depraved, it quickly dawns that someone has slipped a healthy dose of LSD into the booze, and the insanity has only just begun.

Part Step up, part Passolini’s Salo, the nightmarish depravity which unfolds could have been torn from the pages of Dante’s Inferno. While some characters seem to revel in the liberation that the ultimate bad trip provides, others suffer, tormented not for their sins, but seemingly at random. Character dynamics carefully established in the first half are twisted and weaponised in the second. The overprotective brother of one of the dancers, for example, is revealed to have a less virtuous love for his sister than it first appears, adding incest to the already ungodly mix.

It’s electrified filmmaking, and full credit goes to Noé’s crew for the magic they work staging, lighting and capturing a thoroughly convincing underworld, bathing the dance hall in demonic red light as the camera performs the kind of gymnastics an Olympic athlete would win a gold medal for during an orgiastic finale.

Noé, naturally, cannot resist the impulse to go too far on occasion, at one point lowering the tone with some uncomfortably crass conversations. And with zero plot beyond ‘dancers on drugs lose their minds’, don’t expect to find any great meaning to the depravity. But Climax isn’t just Noé’s best in years, it’s one of the surprise highlights of this year’s Cannes Film Festival. How’s that for shocking.