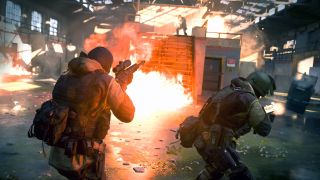 Call of Duty: Modern Warfare finally debuted its multiplayer gameplay last week, with a special look at its new 2v2 mode, Gunfight. However, developer Infinity Ward and publisher Activision decided to unveil the gameplay via a series of Sponsored streams with some of Twitch's biggest names, which didn't go down well with those who just wanted to check out the mode without a bunch of influencers talking in the background.

Thankfully, Infinity Ward has heard the the feedback, and today posted over five minutes of unedited, 4K gameplay of Gunfight, showing off a number of matches of the close quarters mode across several of its tailor made maps. But don't just take it from me; watch the entire thing for yourself in the video below.

Gunfight pits two teams of two players against each other in a series of tightly enclosed maps, but - in a twist on classic Call of Duty PvP - every player starts off with the same gun, randomly selected from Modern Warfare's pool of new and familiar firearms.

The Call of Duty: Modern Warfare 2019 reboot is an Infinity Ward game with a Naughty Dog heart

The mode, which channels Counter Strike and seems to be aiming for the streamer/eSports crowd, has already gone down well with the Call of Duty fanbase, who will hopefully be able to put Gunfight through its paces during the confirmed Modern Warfare multiplayer beta later this year.

In other news, Call of Duty: Modern Warfare is also introducing a brand new, game-changing mechanic into the series' first-person shooter gameplay, while a battle royale mode similar to Black Ops 4's Blackout is also rumoured to be in the works. We'll keep you updated with the latest info as soon as it arrives here on GamesRadar+, so be sure to keep checking back in with us to stay updated.