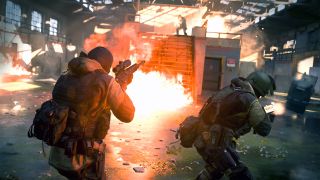 Every year the latest Call of Duty tries to add something new to multiplayer, and this time the Modern Warfare Gunfight mode is the result. It’s a fast 2v2 deathmatch in Call of Duty: Modern Warfare that can play out in seconds, and captures some of the spirit of old split-screen modes from waaaay back when.

The set up sees you and another player, fighting another two-man team in a map not much bigger than a tennis court. Both teams spawn at either end, with matching but randomly chosen weapons and then it’s a fast, ruthless hunt to eliminate the other side. And when I say fast I mean fast. The confined areas throws both teams into conflict almost immediately and the maps I’ve played so far are all more or less laned rectangles that creates a corner peaking game of cat and mouse to get the first shot off, with positioning and lane choice a real tactical play.

The King map, for example, is built in a warehouse and has you making the call between charging the outside edges, centre path, or a higher second level. Or waiting to see if the enemy comes to you. Whatever happens, it is all about speed. If no one gets a kill inside of 40 seconds then a flag appears that needs to be defended to score points (first to six wins). That obviously creates a flashpoint that only increases the risk, and rate of play.

Teamwork, map knowledge,  and positioning are vital. During my time playing, once myself and my teammate clicked, we had an amazing run as we covered each other’s corners, anticipated each other’s moves and melted the enemies’ attempts to take us down. At one point we fought back from 5-0 to win as a small crowd gathered to watch the impossible unfold.

Adding to the tight maps and speed of play, the random weapon selection is both a great leveler and a complete wildcard in the mix. Because everyone gets the same gun it gives everyone the same advantage, but it also forces everyone to play to the weapons’ rules. There’s no charging the opposition down with an RPG for example, while a shotgun or pistol demands close quarters play.

Overall it’s the simplicity of Gunfight that shines. The speed of play and the level playing field of random weapon choices creates a churn of matches that can take seconds, and games that can last hours. It’ll be an interesting addition to the competitive scene as well because it is all clutch, all the time. That should make it both an entertaining spectacle to watch as well as a real test of pro-players forced to compete while eventually matched.