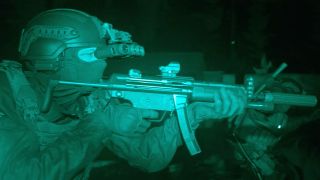 Reloading always seems to come at the most inconvenient times in FPS titles. Even if you have a compulsive reloading problem like me, where the mag has to be full even if I've only fired one bullet, bullets always seem to run out just when you've got your crosshair perfectly trained on a foe. But with the new reloading-while-aiming mechanic being introduced in Call of Duty: Modern Warfare, you'll be able to reload your gun while keeping your sight pinned to the foe of your choice.

Infinity Ward's animation director Mark Grigsby made the announcement in an Activision blog entry, writing that "one other thing we added this year is the Aiming Down Sights reload. In the past, if you’re ADS, and you’re shooting and you reload, the weapon would go off to the side, and you’d have to retrain to get to your target. This time if you reload, it stays on the target, so you can stay in the battle."

Plus, the animations are different depending on when you reload your gun: "in the past, we would never physically show that transition of one mag to another, but this time around, everything’s physical, so if you have an extended mag, like a drum perhaps, or a long magazine, all of the movements within every reload are visceral, strong, aggressive" and alter depending on whether you're reloading an entirely empty mag, or one that still has most of its bullets remaining. Then Grigsby says that with this new mechanic "after you’ve taken down five different dudes in a room – and you reload, you go ‘shit yeah, you’re done!’".

If you're still salivating for more games to play, here's the best Amazon Prime Day game deals around at the moment, or look below to watch our preview of Call of Duty: Modern Warfare!