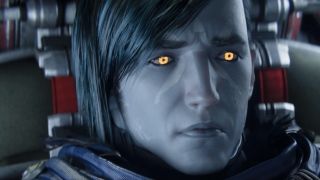 Did you ever read through the original Destiny lore and get the sense that Bungie's major antagonist, the Darkness, was super vague and undefined? Well, there's a reason for that; namely that Bungie's major antagonist was super vague and undefined. But don't take it from me - Luke Smith, director of The Taken King and Destiny 2 admitted as much to Kotaku.

"So, I think that at a point, just totally candidly? We had no idea what it was. Straight up. We had no clue," Smith said. "We didn’t know what it was, and we, for a period, we chose [that] we’re going to lump all the races [in together], and you see this in the tooltips in the game. 'Minions of the Darkness.' And we had taken all the races and said, 'Ah, they’ll just be the Darkness.' But that’s not what the IP deserves."

This is why Destiny 2's story is so squarely focused on the Traveler and your Guardian losing their Light. Those lore elements are a lot more established and understood, so putting aside the universe-ending… whatever… should help the game feel more sensical. And this isn't to say that we'll never hear the words "the Darkness" again - it's just taking a backseat until Bungie can figure out what it actually is and how to make it a comprehensible foe.

"When we’re going to talk about Darkness next, we need to know what it is and have a plan for it," Smith said. "And we do."

Oh well. At least Destiny 2 looks super pretty running at 60fps and 4K resolution. And our hands-on preview suggests that even if the story needed to take a hard left turn, at least the gameplay is smooth.